Skip to content
A few years ago, my uncle and I spent hours at the Library of Congress looking for a book written by my late grandfather while he was a professor of Islamic history in Karachi. The book was listed in the library’s enormous archives, but we couldn’t find it that day. I forget the reason the librarian managing the Asia section gave for it not being there; I just remember walking out with a very heavy heart. For some reason, finding that book in DC, thousands of miles away from where my grandfather wrote it, was so important. Perhaps because of the fact that while he is alive and well in my heart every day, his memories as sharp as when I was 11 and grieving at his funeral, I own nothing of his. No mementos, no photos of us together, no copies of his books. Nothing.

I know those are just semantics. Physical keepsakes mean nothing before the startlingly vivid images I have of him in my head to this day. Like the one of him delightedly answering my salam and embracing me at sunset time upon his return from the mosque, in his old neighborhood where I spent most of my evenings playing. Or the one where I would knock on his room’s window during smoldering hot afternoons as he slept, cheerfully asking for money to buy Kulfi from the hawker outside. He would smilingly get up every single time without a single frown (afternoon siestas were a huge deal to my own parents, so I cannot tell you what a big deal that was to me).Or the one where I would waltz into his room uninvited on the third floor of his house, where he spent most of his time by himself reading, and start rummaging around his large collection of books. He would patiently answer my questions about the books, and proudly share stories about some, like the one carrying a short story written by my mother when she was a gold medal winning medical student. He had saved every single prize she ever won, and I, his first-born daughter’s daughter, was his favorite audience for them.

My favorite memory of my grandfather though is of the afternoons spent with him in a quiet, leafy neighborhood with big trees near my school. On the afternoons when he was assigned pickup duty for me, my siblings and two cousins, he would drive us there, park under a big Oak, and open the trunk of his old car to reveal a large red cooler containing fresh icy lemonade (shakanjbeen) he had extracted for us at the house. He would pour us each a cup, and then let us play for as long as we wanted. When we were exhausted, we would finish off the drink and drive back to his house, where my grandmother would have lunch ready for us. I can still taste that shakanjbeen.

I was a painfully shy kid, bullied in school and mortally scared of sharing my many, many feelings with any adult in my life. My grandfather became my sole confidante, because he treated me differently than any other adult ever did. He listened – with endless patience – to all my woes, about teachers that I didn’t like, problems I was having with girls at school. He was never bored. He treated me like I was a queen, as if my company was more pleasurable to him than anyone his own age. It meant the world to a kid like me.

During my dad’s long business trips, he would come spend the nights with us to keep my mom company. An avid walker, he would always walk several miles back to his house the next morning. On weekends, I would wake up early just so I could tag along on those long walks, sneaking out before my siblings woke up. I often spent weekends with my grandparents, and those mornings, he and I would sit for hours chatting over with a breakfast of fried eggs heaped with salt and black pepper.

Despite those long chats with me, my grandfather was a quiet man, a man who loved his books and solitude. He never bragged of his achievements, but he was an accomplished author who published critically acclaimed books on the history of the Ummayad dynasty and Pakistan.

In the last month of his life, as he lay dying of lung cancer despite not having smoked a single cigarette in his life, I remember reading some of his books to him aloud. His eyes were often closed in pain, and I’m not sure he cared at that point what I was reading, but he would still nod encouragingly. When I was home, I would call him every night on the phone that had been placed in his bedroom during the final days of his life, fervently hoping to hear his voice, but his voice was pretty much gone by that time. I would keep talking, hoping he could at least listen in my childish selfishness, and he would stay on the line, despite his pain and not being able to respond beyond a yes or no, still listening with endless patience.

He died when I was 11. And I am still grieving. I did not know my grandfather like his children, his wife, or any other adults in his life did. I saw him from a colored lens, blind to any failings or faults he had as a husband or father. My lens was that of a shy, scared little girl whom he made to feel like the most special person in the world. Whatever confidence to pursue my dreams I have today, I like to credit a lot of it to him. To me, his memory embodies the power of a loving and caring adult in a child’s life. It is my most treasured memento. 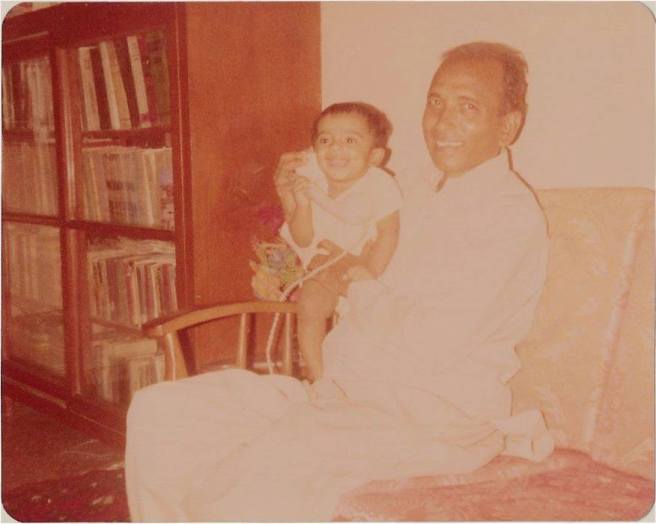 My grandfather with my brother, around 1982.