I came across an excellent, and damning analysis published by the blog, The Brown Pundits, which explores the reasons why Pakistan’s notorious blasphemy law continues to find blind support among its masses, and is so difficult to repeal. Even if the law itself is repealed, what of the pervasive ideology that is constantly fed by the religious elite in the media, places of worship, and political parties? How do we deal with the citizens’ own voluntary enforcement of the law in a number of recent cases – as demonstrated so brutally in the murders of Shahbaz and Shama Masih of Kot Radha Kishan, Salman Taseer, and of the Ahmedi grandmother burned with her two grandchildren in a Gujranwala home, among others.

On Brown Pundits, Omar Ali writes, “…this law is the updated expression of a pre-existing social and religious order. Blasphemy and apostasy laws were meant to protect the orthodox Islamic theological consensus of the 12th century AD and they have done so with remarkable effectiveness. Unlike their Christian counterparts (and prosecutions for heresy and blasphemy were seen throughout the middle ages in Europe) these laws retain their societal sanction and have been enforced by free lancers and volunteers where the state has hesitated.”

One must not, however, forget that while the inciters and the instigators of this vigilante blasphemy justice are so often religious authority figures, conveniently in possession of a loud speaker or a TV show, a majority of the actual enforcers have a very different profile. They are either illiterate or under-educated, with little capacity (or perhaps reason) to intellectually question ideas that have been ingrained into their hearts and minds for generations. Yes, religious extremists in Pakistan are certainly not limited to its very large illiterate or barely educated population. But it is important to note that the most brutal manifestations of extremist ideologies are carried out most often by a faction that is in a far different position, intellectually or socially from the figures who influence their thought.

In cases like Kot Radha Kishan, while classic mob mentality definitely comes into play (personal responsibility diminished by collective rage), it still takes a certain extent of ignorance and self-doubt to give birth to such blind, unquestioning belief that crushes every iota of humanity. That blindness is what leads people who may not be hardened criminals to physically commit the kind of atrocities Shama and Shahbaz underwent. It is also the most common mark of a “doer” in Pakistan’s religious extremist terrorism.

Let’s come to the “talkers,” or the influencers. Many radicalized religious figures in Pakistan who staunchly support the blasphemy law would tell you they do not endorse brutal violence. They want the “rule of law” to be followed (such as the more ordered, civilized way of killing the blasphemous by hanging). They most definitely do not endorse burning people in the streets. But while the seemingly educated and privileged class of advocates and supporters of the blasphemy law (and the radical, Wahabi brand of Islam) do not directly perpetrate violence, they do use the media, mosques,  and political platforms  to express their ideology ever so eloquently; to spread far and wide what they perceive to be the true message of Islam; and to protect Islam from being misused by the dangerous liberals –  all in a country where 97% of the population is Muslim.

But while the talkers do the talk, they seamlessly instill their radical ideology into the minds of their most ardent followers: those who have the most reason to believe and the least reason to question. And the same ideology that for them is a tool to amplify their influence and authority or to feed political ambition, becomes a deadly weapon in the hands of their followers.

And why not? This group has much less to lose than the talkers. They are seldom as successfully integrated into the socioeconomic fabric. They often live in communities severely neglected by the state, living on the fringes of society, barely making ends meet. They have little to thank the state for. Armed with dogma, collective anger, and far less restraint, they become the feckless foot soldiers in a war against their own people.

Think about the men who murdered 132 children in Peshawar.  The leaders and masterminds of organized terrorism schemes may very well be educated figures with just enough “grasp” and charisma to brainwash a following, but their followers exhibit an astonishing ignorance of the history or subtext of the very religious teachings that are used as their “rationale” to kill. That isn’t limited to the members of TTP. Most literate Pakistanis can read, but not actually understand Arabic, and many pass through life without ever having read a complete Urdu translation, or Tafseer (analysis) of Quranic text. Many will accept the version of Quran fed to them by the religious authority figures in their communities or mosques. They will also often blindly accept “hadith” as word of God, even though the veracity and interpretation of many ahadith is constantly in question.

Most literate Pakistanis can read, but not actually understand Arabic, and many pass through life without ever having read a complete Urdu translation, or Tafseer (analysis) of Quranic text.

So when TTP spokesman Ehsanullah gave a most twisted explanation of why it was perfectly Islamic to kill the children in Peshawar after the attack, based on a hadith, it was not very hard to figure out how the TTP leadership found handy help to carry out the dirty deed. That a significant number of TTP members belong to the FATA region, where an entire generation of youth has been raised amid a civil war, drone killings, and a pervasive sense of being forsaken by the Pakistan army and government, it is even less of a surprise. 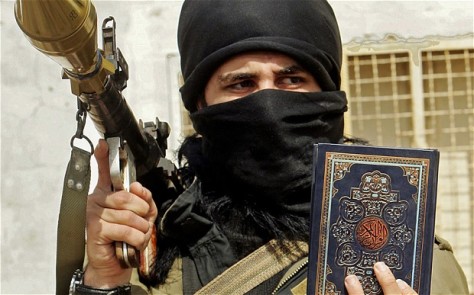 Ignorance is lethal, but even more lethal is the combination of ignorance with dogma and rage.

Is there a way forward?

In understanding the doers in Pakistan’s terrorism debate, I strongly believe that we can find some solutions to get us on the path to redemption. Advocates for human development, specifically in education and other social services are on to something when they suggest that Pakistan’s extremism problem as NOT mutually exclusive from its high rates of poverty and illiteracy. Pakistan is one of the world’s largest youth bulge countries with a 48 percent population aged 15-49 and 56 percent (age 15-64). In theory, a large young, productive, and dynamic population would be considered an omen for prosperity and growth. Not for Pakistan. For Pakistan, its growing bulge of disenfranchised youth is being increasingly turned into sheep by its ambitious politico-religious elite. There are just no better options for them.

Reforming Pakistan’s ideologues – several generations that have grown up in the toxic shadows of the Zia ul Haque era – is a daunting task. What is much more achievable is focusing on its children. It is time to take a fresh start and to rebuild; to focus on reforming the curriculum in schools; strengthening social services and economic infrastructure for our most marginalized communities; creating employment opportunities; and eradicating poverty. Bombs, drones, and hanging the terrorists are never going to achieve what this renewed focus can.